Free Shipping for all orders over 100€ 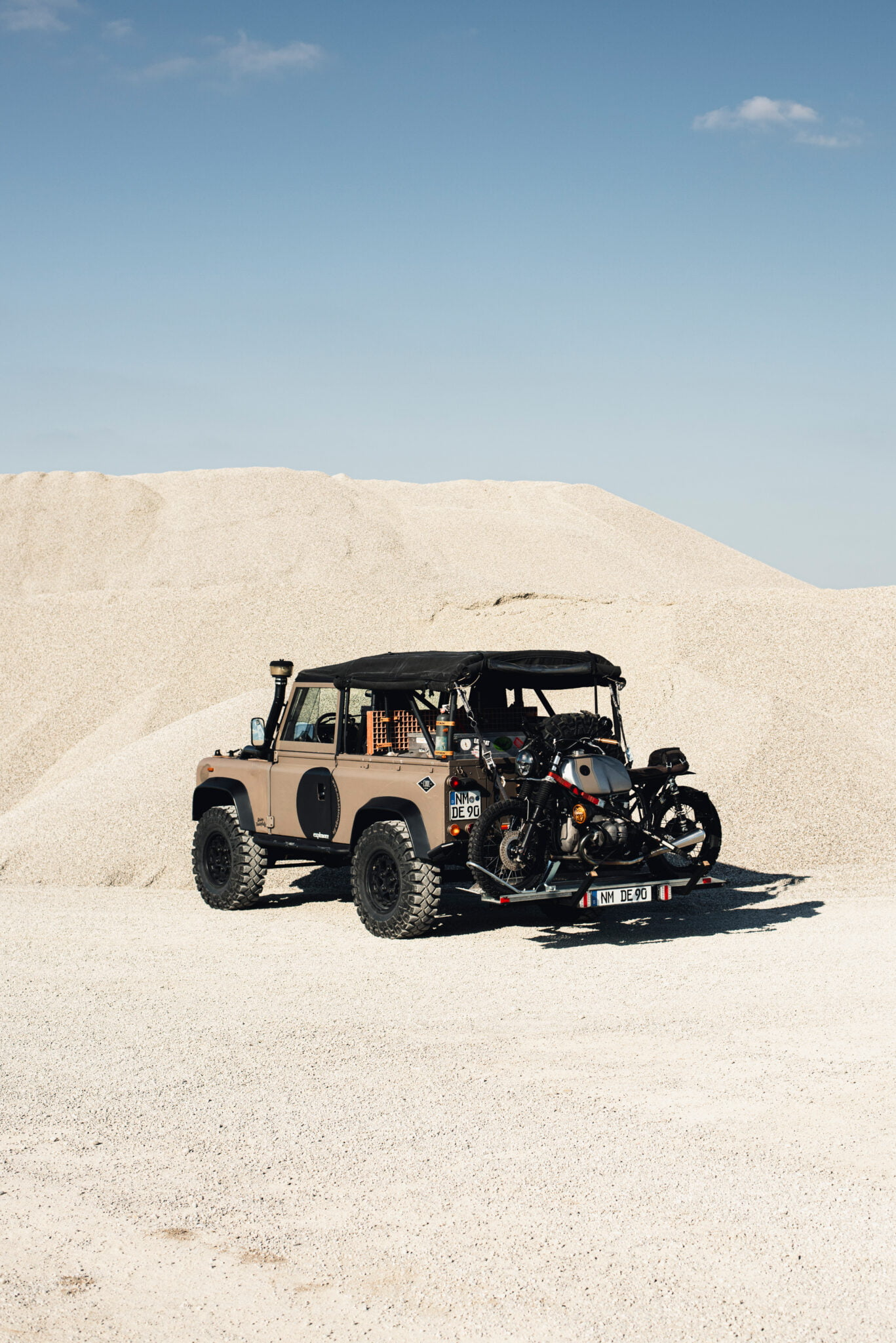 Hi Alex, would you like to introduce yourself? Who are you and what do you do for a living?

Hi, I’m Alex(ander) Frisse-Bremann, I’m a trained carpenter and I live in Neumarkt, Bavaria. Since 2012 I’ve been working for NAKATANENGA. Initially I was involved in building their rooftop tents, but nowadays I’m part of the product development team and I do customer consulting.

For those that don’t know much about off-roading, what exactly does Nakatenga do?

As well as our roof-top-tents (called „roof lodge“) our brand develops products that revolve expressly around the Land-Rover Defender. We have a car workshop where we take care of all mechanical issues, but also have a lock-smithery, a carpentry, and a tailor’s shop. We have made many products which are specific for the Defender, and now we are developing items which are for the NEW defender. Besides Land Rover we do also make products for off-roading purposes and the outdoors in general, not brand based. We have an online shop and a store in Neumarkt, Germany.

What exactly are these two vehicles?

The car is a Land-Rover Defender 90 ExMod from 1991. That means that it was previously a military vehicle. I now call it Sandy Grey and I’ve had it since 2012, shortly after I started working for Nakatenga. When I bought it, it looked very different, but I’ll tell you more about that later. About five years ago I thought the Landy was kind of done, and I needed a new project to keep myself busy! So I finally got the motorbike license and bought a 1977 BMW R100RS, completely original and from its very first owner. I rode it like that for a few months but knew that I would want to build it to be a scrambler. And because the original colour was red I call it Ruby Speed! 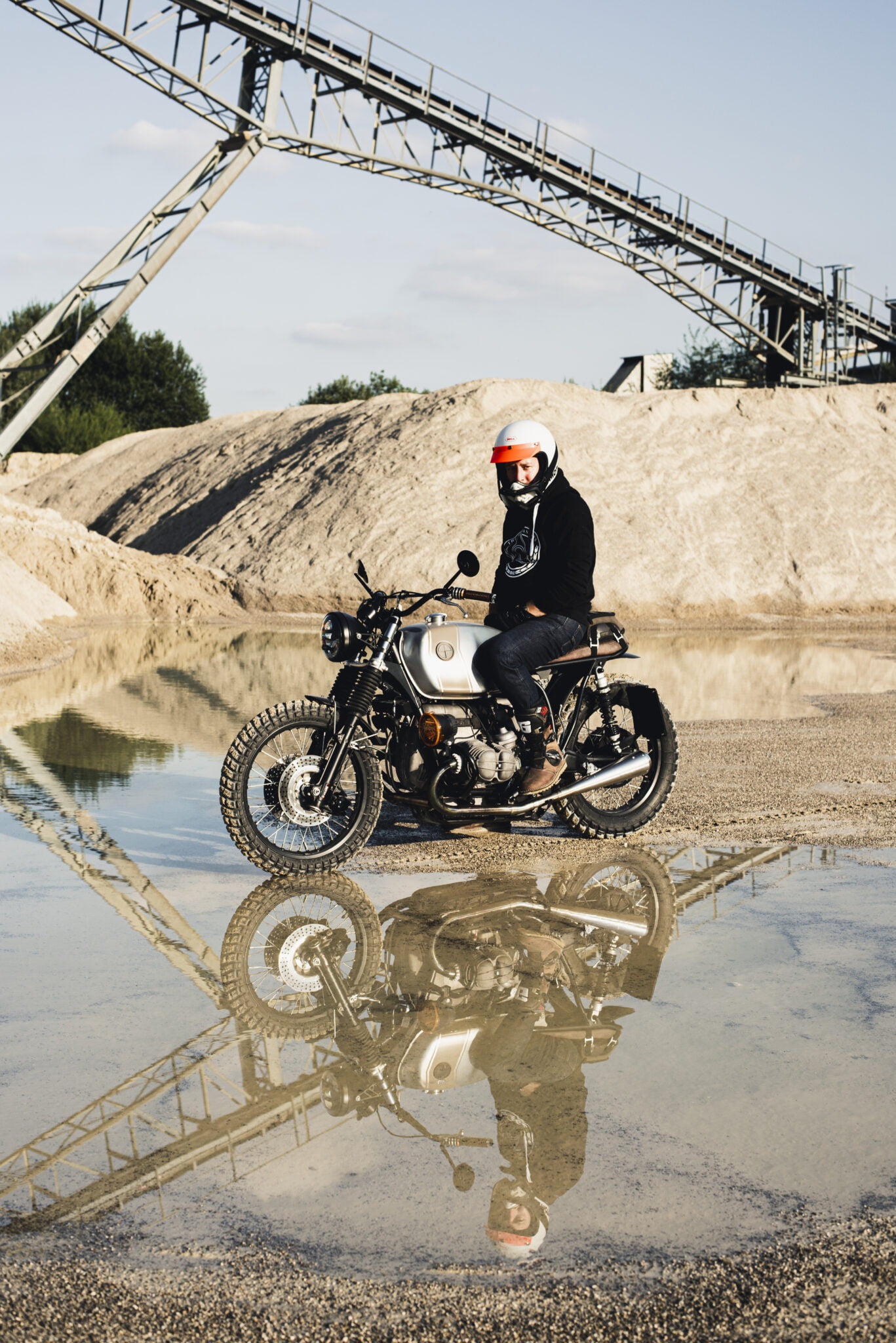 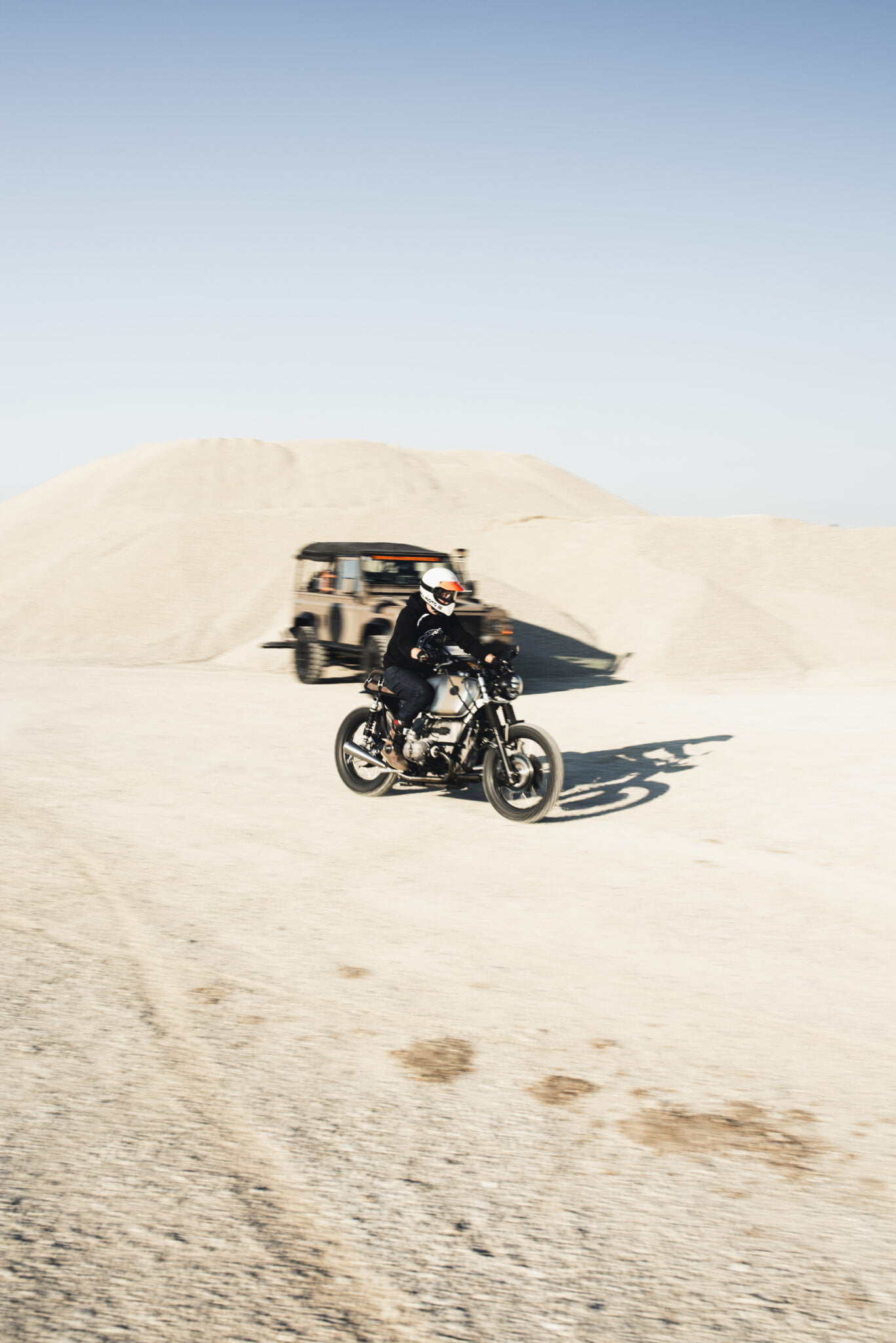 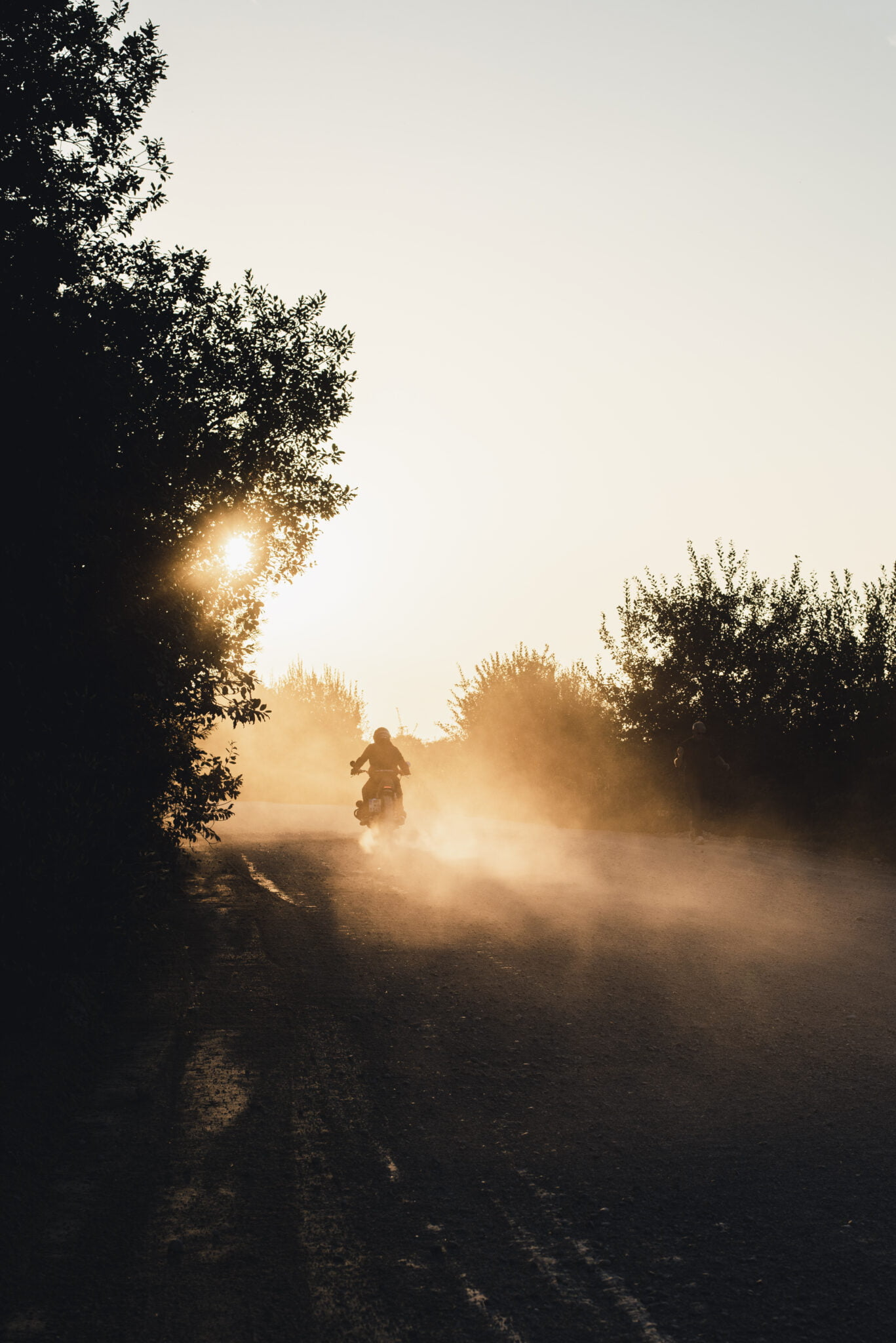 It seems like you mainly work on your vehicles yourself. You also built the motorbike rack for your defender. Where does that passion come from?

Yes, that’s exactly right. On all of my vehicles, I try to do all of the work myself. I never learned any of it, but that’s the best thing about of the mechanics in these old cars. You can fix and modify a lot yourself, and if I need any help I can ask my friends and colleagues at work.

I think passion also comes from my education; with the will to craft comes creativity and I’ve always loved to imagine a final product and create it with my bare hands.

And that Bike Rack for the defender? I built that because I could never choose which vehicle to take on vacation, and now I can take both and it works out just fine!

If I was to ask you to make a list of the modifications that you have made on these two vehicles, I think it would take more time to read than the instruction manuals of both put together. That’s why I’d rather ask: which mods are your favourite?

As well as the new paint job in RAL 7006 and the new Black soft top, I would say the engine swap for the Landy. Initially, it had a 2,5L naturally aspirated engine with 68hp. Of course you can get everywhere with that but you do end up leaving a trail of drivers behind you!

So I got a Land-Rover Discovery 1 for its parts and converted the rear axle to disc brakes and added power steering. Sandy is now also equipped with a 300tdi, a 2,5L turbodiesel. In early 2020 the engine was completely rebuilt and is now better than new.

For the BMW, aside from the optics, the entire technology was overhauled. Every cable was replaced and the bike now runs on a CAN-Bus-System. Most lights were replaced with LEDs and the engine is being started with RFID-technology, which means with digital ignition. All electronics, the indicators and buttons are from MOTOGADGET. Those might be some of my favourite details.

Could you talk a little bit about the design of the BMW?

I would say that the design is quite simple, with old technology being optimised and combined with a more modern one. I wanted Ruby to fit with Sandy, which explains the off-road look, the beefy tyres and the fuel-tank in a similar design to the defender. The repeat pattern on the leathered bench is inspired by the tread pattern on the tyres.

After our photoshoots, I felt like you have built the defender for one specific purpose. What would that have been?

Hmm … actually I’ve tried to build it for numerous purposes. I kind of see it as a driving Swiss army knife. Sandy is my daily driver, I don’t own another car so that’s what gets me to work every day. At the same time, it’s clearly an off-road vehicle, built for rough terrain, which I have improved with my rebuild. Later I also started to participate at off-road events, and for extra safety, I added an interior roll cage, a locked diff at the front and the rear and a winch, added to a bumper which I designed myself.

On the other hand, I also use my Landy as a traveling vehicle. For that, I changed the roll cage and the soft top so that I could add a rooftop tent or box. Underneath the loading area in the back I’ve got my cooking equipment with a two-burner stove.

Of course I also paid attention to navigation, communication and entertainment. I installed a complete sound system by FUSION which is made for nautical life and is fully waterproof. There’s also an off-road sat nav by GARMIN and a CB-radio. So I would say that there a number of purposes behind the build.

Have you done some bigger rallies and drive outs with the defender yet?

Last year I drove the „Five Mountains Tour“, an off-road roadbook tour from Slovenia to Albania. I’ve also spent 10 days in the Rumanian Carpathian Mountains. As well as this I’ve been to the DEKRA-Offroad-Challenge at the Lausitzring and did the POM in Poland numerous times.

There’s many more goals though; for example the desert which is a great sandpit!

What would you say is the best thing about the passion for the automobile?

No money for drugs, always having filthy hands, and never be bored. I got to know many great people and got to see many parts of the world. #LandyLove 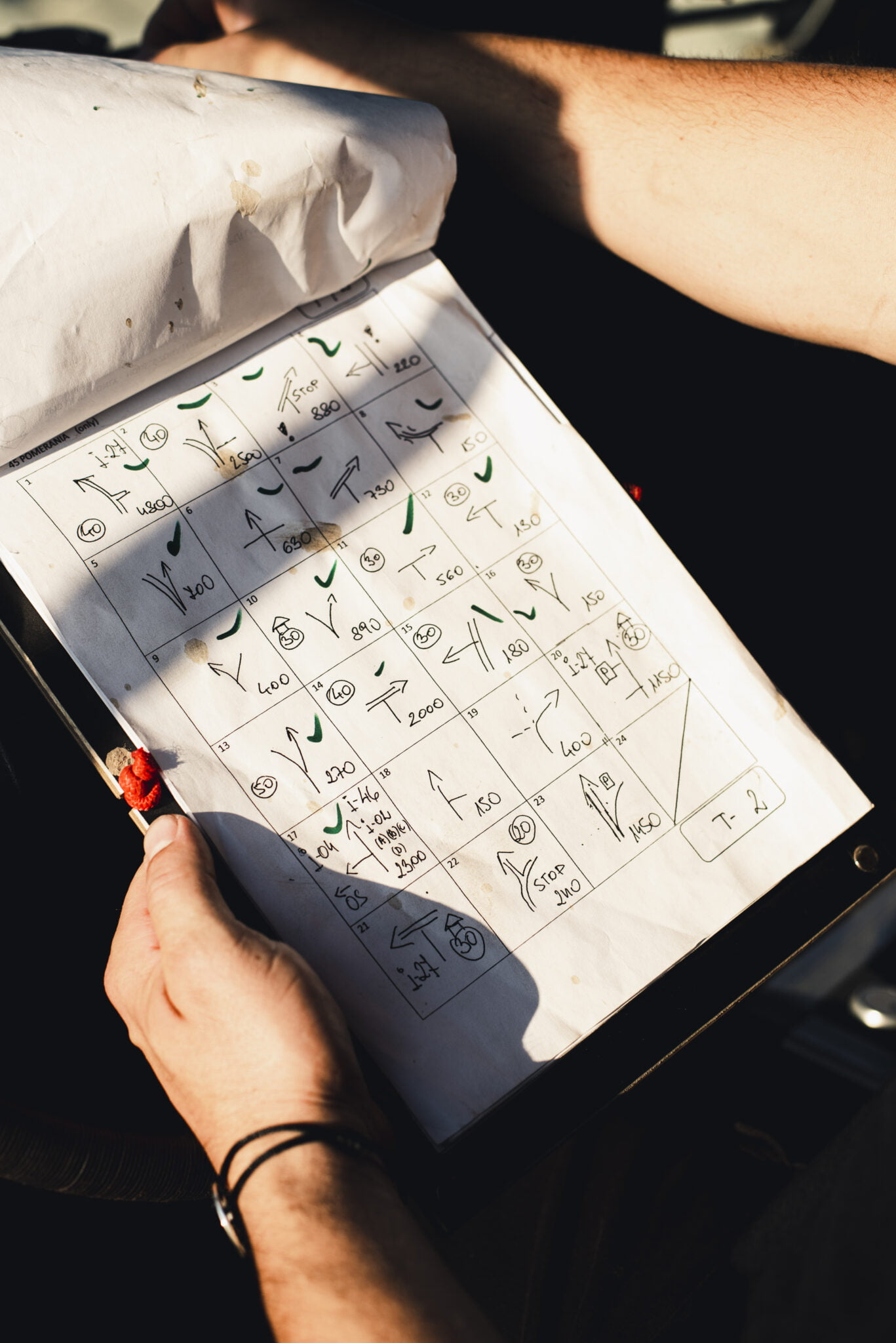 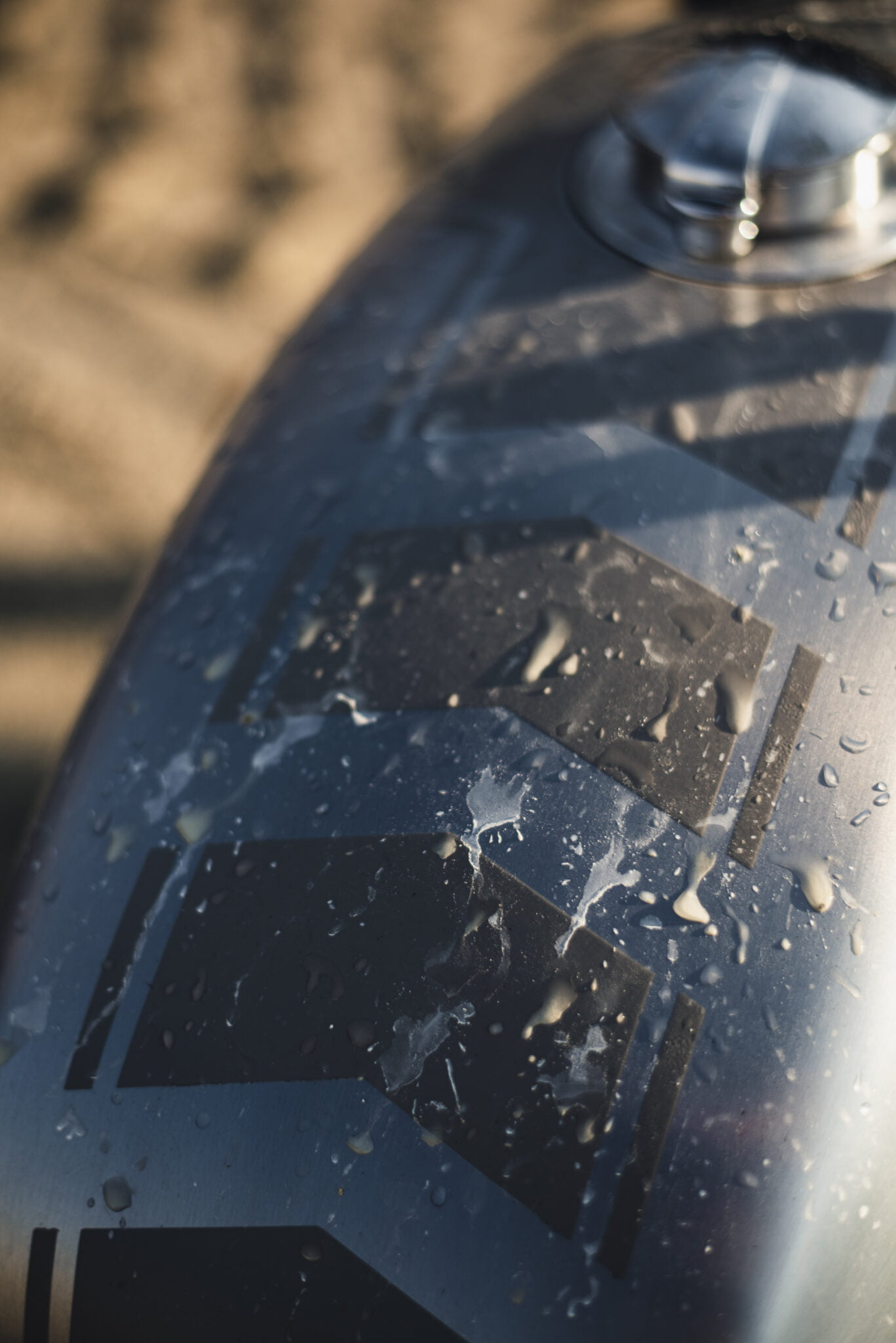 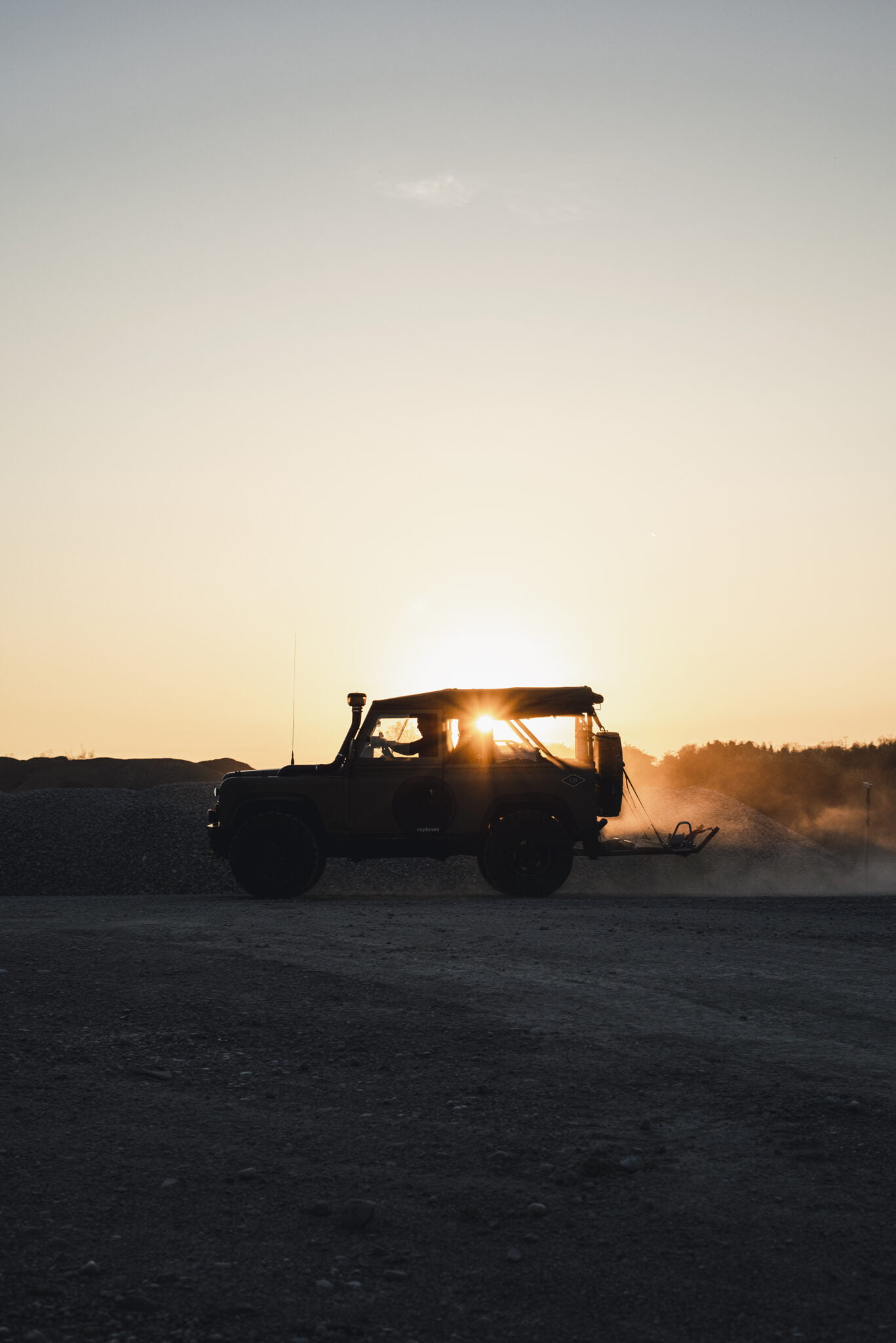 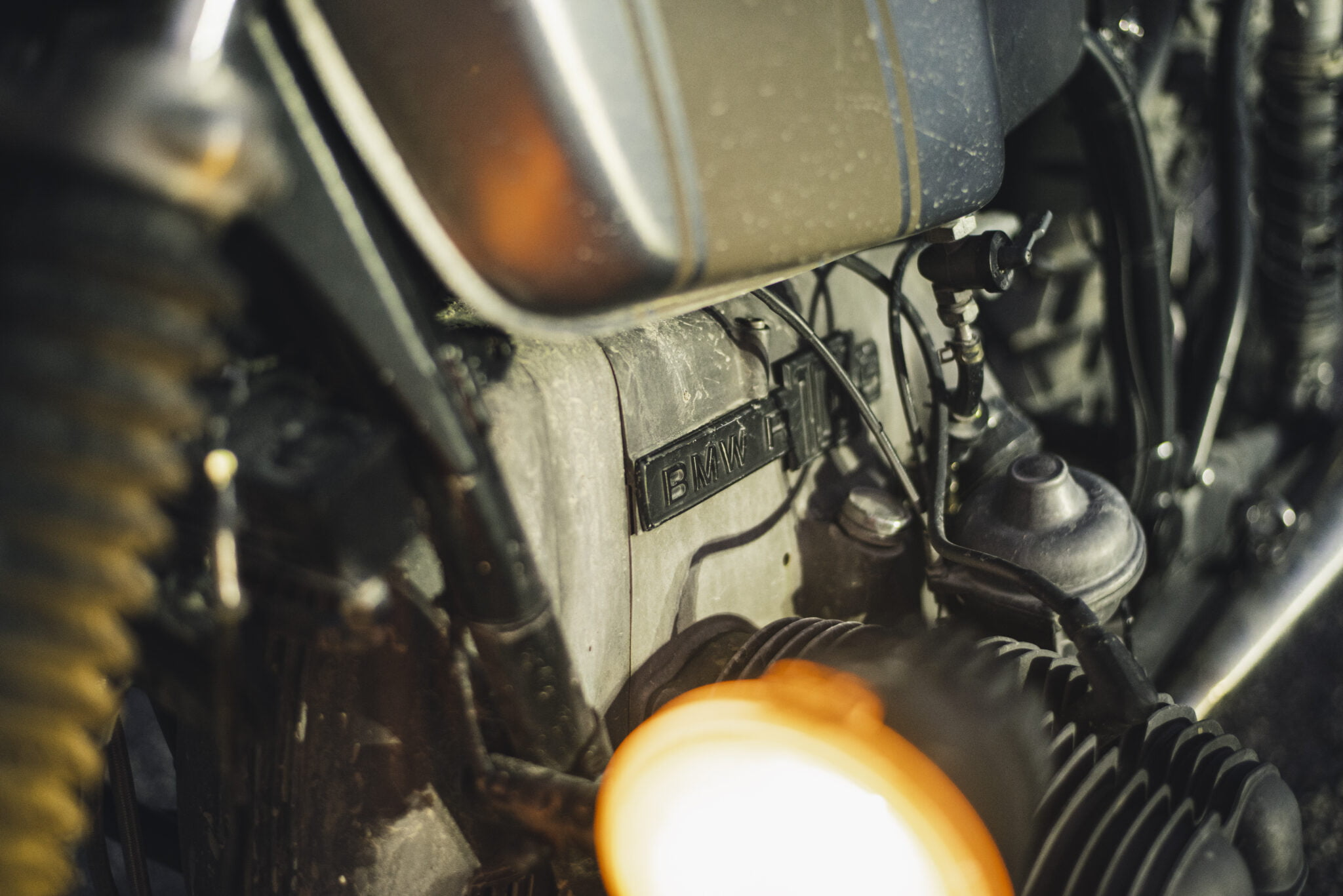 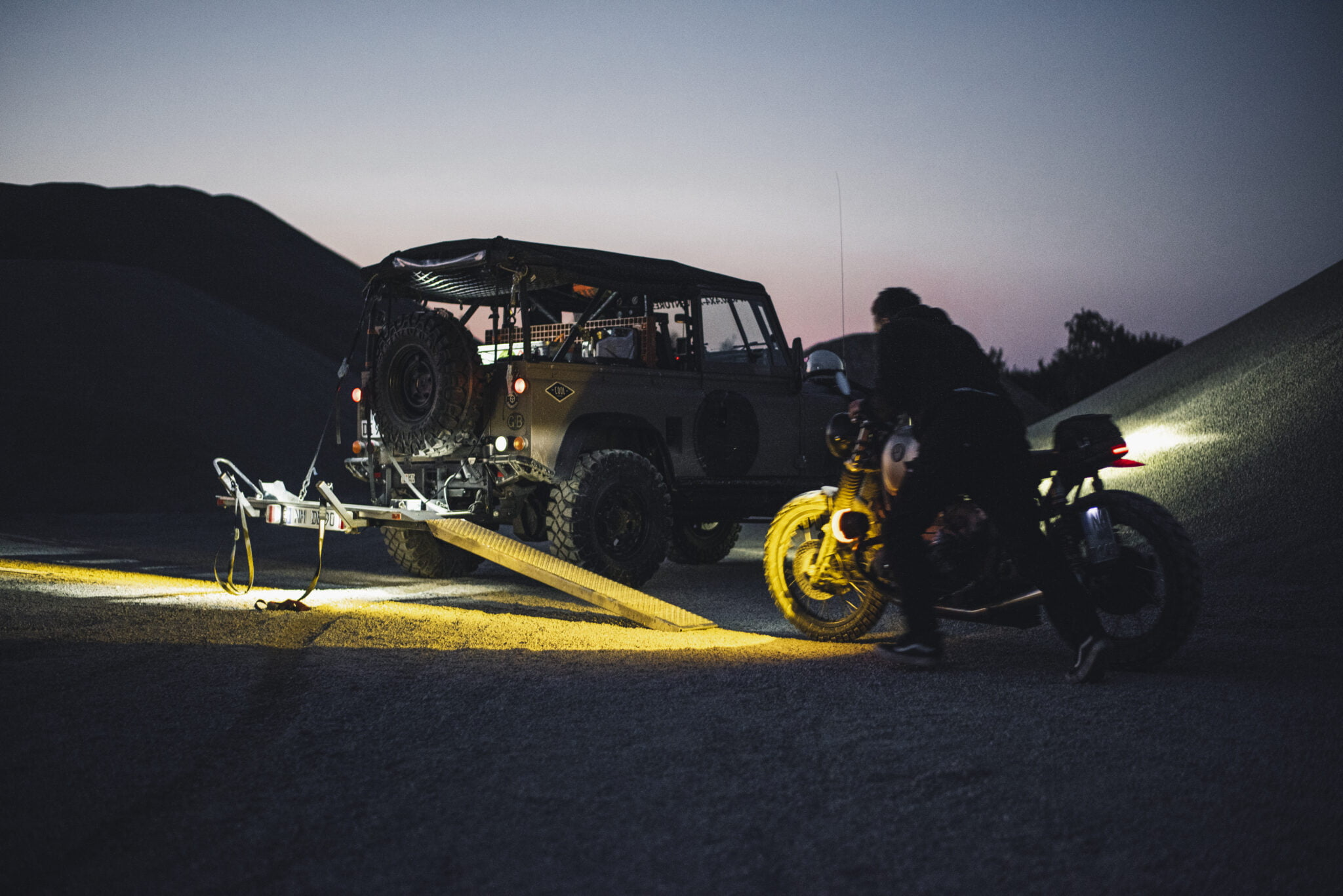 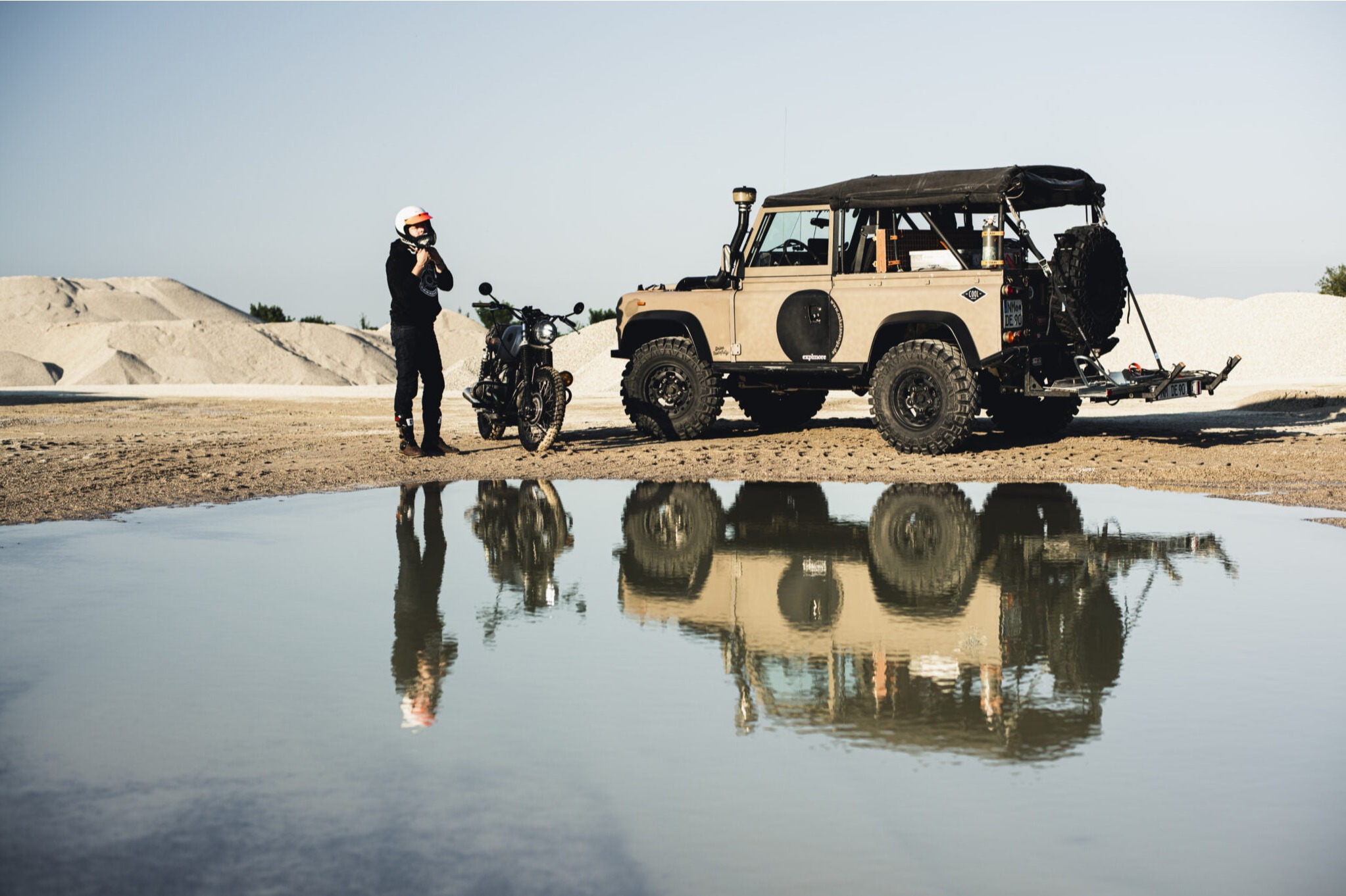 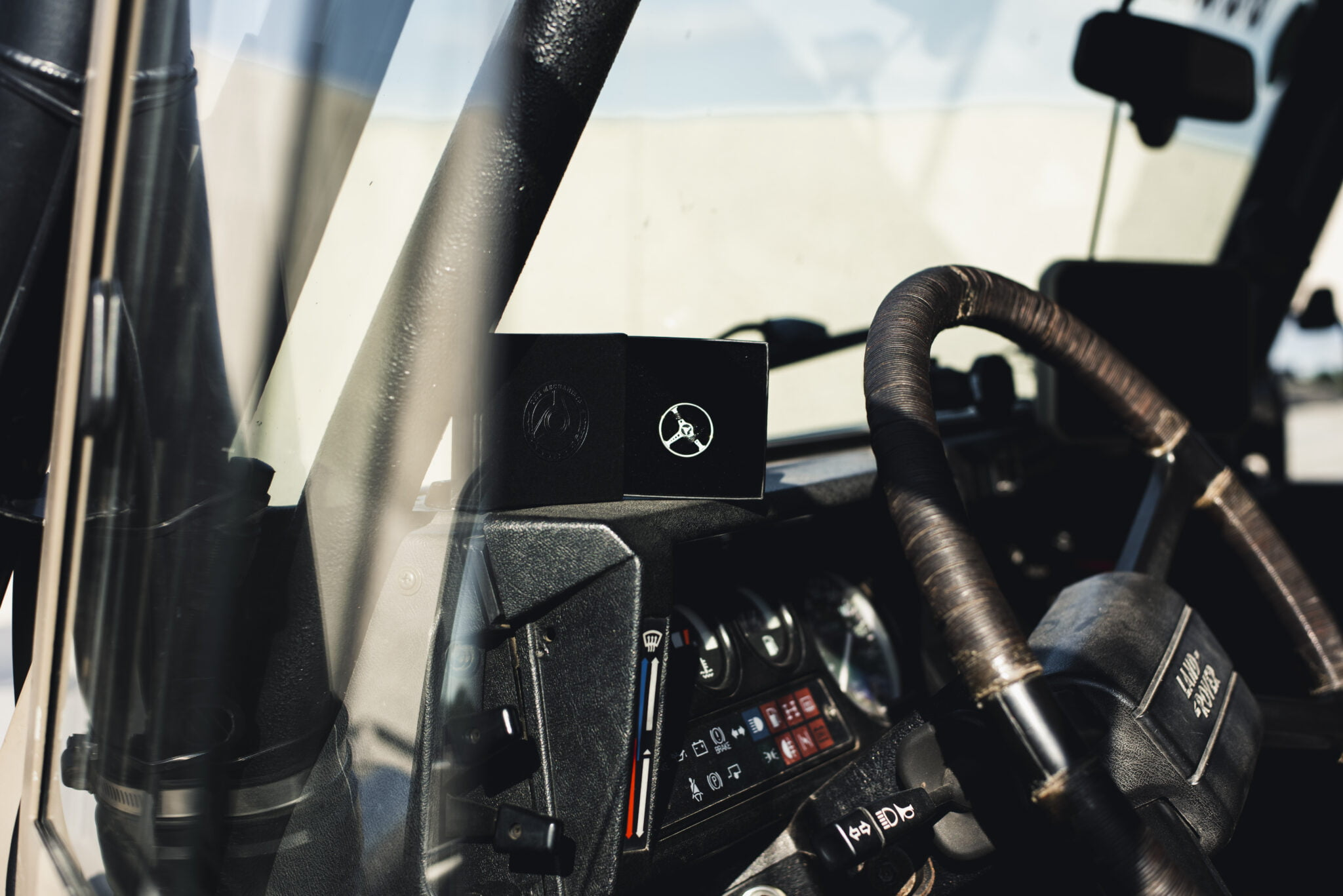 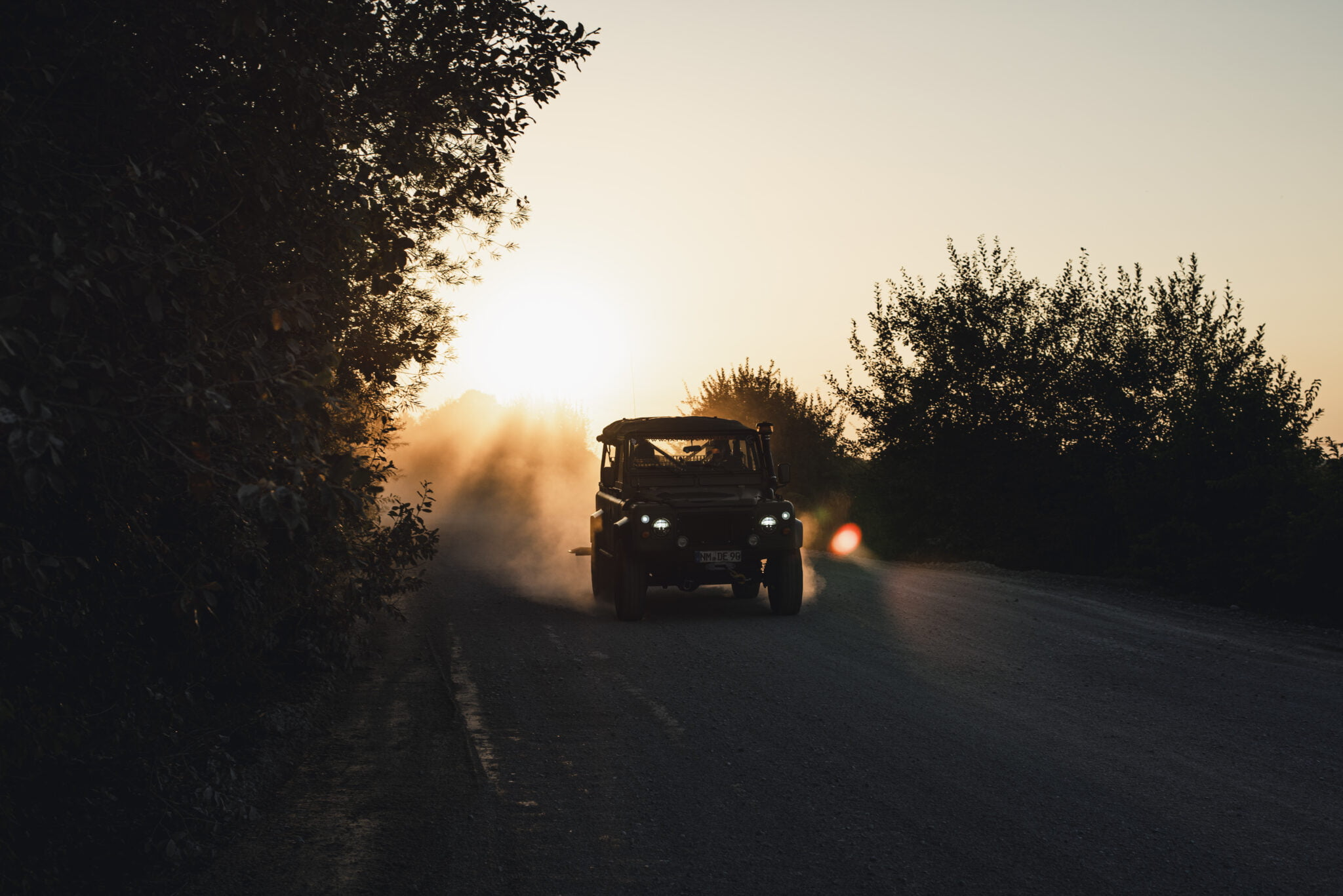